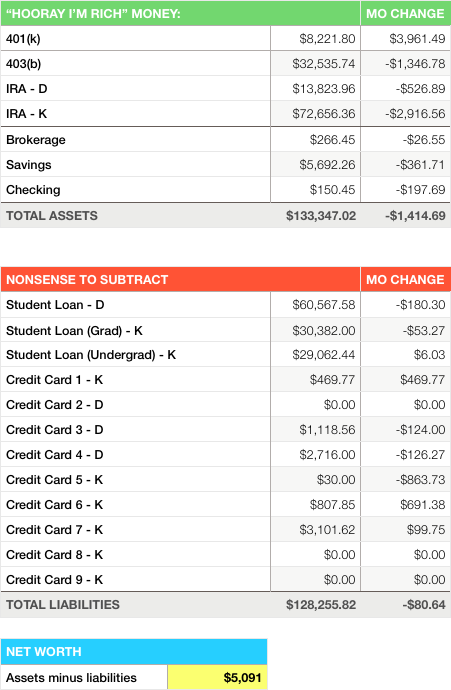 I’ve started to slack in my timely reporting, but I did at least crunch the numbers early November.

It Ain’t a Smooth Onward and Upward Ride

We’ve lost more than $1000 since last month. This is a primo example of why it can be dangerous to check net worth monthly. Investments are a long term game and do have small fluctuations.

If you look at the 6 months since I started tracking my net worth – HOLY COW – We’re up about $9000, taking it from the red to black. A $1300 gain from September doesn’t seem as impressive. Seeing it as a more than $1000 loss since the month prior sucks.

An Epic Battle Against Spending

While it wasn’t all roses and growth, that’s not the reason I’m super down about net worth. We’ve been fighting an epic battle against our spending. We’ve been losing. We’re losing so bad all our money is spoken for until March 2017. We’ve got to figure out how to earn more as we can only do so much to spend less.

Money is not just about math. It’s about emotions too. And irrational decisions. Right now I’m frustrated and need to figure out a way to get ahead. What tracking my net worth has shown me is that so long as my husband and I continue on this path, we’re not going to get very far very fast.