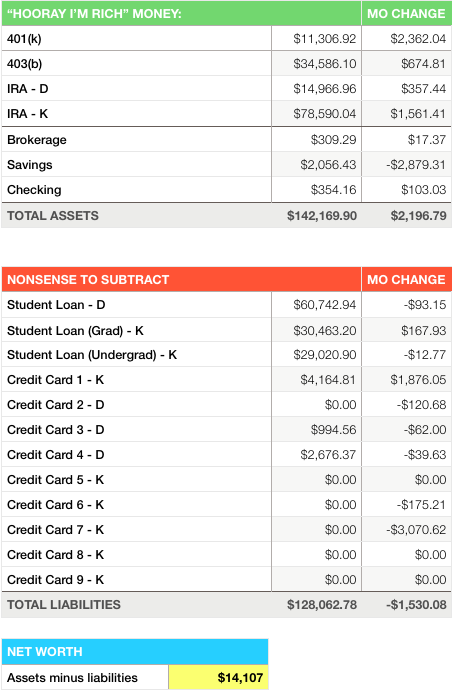 Starting the year out strong!

When I made the FML reckoning in May 2016, and promised to begin tracking our net worth monthly, I discovered we were in the hole over four grand. We’re now positive $14017. That’s a gain of eighteen thousand dollars. That’s a lot of dollars. It’s humbling and rewarding to see forward progress.

It took a lot of effort to throw money at retirement savings to make this happen. I found an old list of our investment accounts from October 2013. We had $61292 between the both of us. Student loan debt was around the same amounts if not more. So we were about sixty thousand in the hole then. Now that’s progress!

Throwing Piles of Money Around Playing the Credit Card Game

For anyone who looks closely at the transactions, you can see that while we’re hoarding cash in retirement investment accounts, we’re also playing a dangerous game with my credit cards. At the end of 2015 into 2016, we racked up debt on one interest free credit card after another. We took a huge hit to income and so put all our basic life costs on credit cards. Now they’re coming due, so we’re racking up a NEW card so we can stockpile cash to pay those about to charge interest.

I sat down last week and looked at all my spending in 2016. It was way out of whack with my budget. I set my budget expectations for 2016 in early 2016, but somehow, I consistently fell into a trap of thinking I had more money to spend on groceries, on fun, on travel, on everything really, than I had available. If you’ve got access to credit, it can be easy to put aside “savings” to “pay yourself first,” only to discover spending creeps and creeps until it starts lingering on credit cards. So, those savings end up getting drained to pay credit card debt. I mean I stared at it happening for six months and yet still couldn’t stop myself from doing it.

Unless I do dramatic changes in 2017, I’m going to slowly sink into a credit card debt hole I can only get myself out of by trashing my long term savings goals. That option sucks. Here’s to holding my ass to the fire to spend less in 2017!

In future posts, I’ll share my big goals and bold plans to get there.