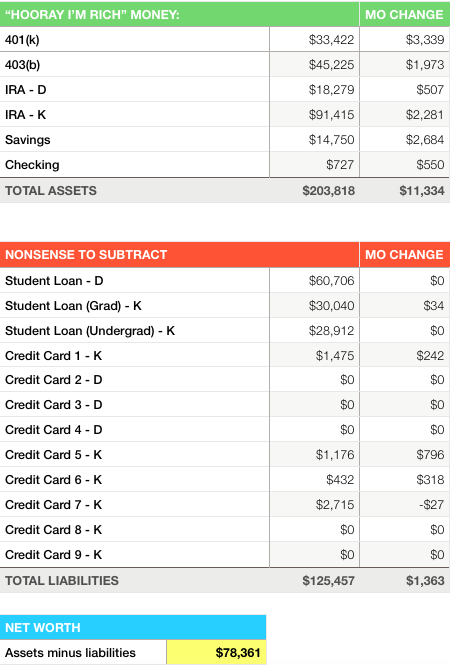 My Money Now Prints Money So Why Don’t I Feel Rich?

We have entered “the zone.” Not only is a kick ass stock market helping nudge us along, but we’re generally at the tipping point that our money is printing more money. Our assets keep growing without us lifting a finger. Maybe soon we’ll be so rich with this free money that we can become those out of touch terrible people who look down upon those working for their money and proclaim “It’s all so easy. Just look how hard I work for all I have.” And then others will want to punch us in the face. It’s important to have goals.

But seriously though. We’re kinda sorta supposed to be in the happiness zone with sunny beaches and a work free existence coming into focus as a real possibility in our lifetimes. So, why do we still feel so broke?

Oh, hello there liabilities – I almost forgot about you crushing my soul. Why don’t my student loans go away? Why do the credit card balances linger? They both sit there, taunting me, showing me “Girl, you don’t have it all figured out.”

I Thought You Said You Hit 80k?

In a tweet or a post or in my head, I said “we’re worth 80k!!” This calculation doesn’t show that. Stocks fluctuate. A lot. On a pretty regular basis. So, a few days before I tallied up all the numbers we may have been back of envelope worth 80k. When I captured this snapshot though, it was a little less.

We did break a different barrier, however…

When I was a grad student, $200,000 seemed like an impossible sum. I earned a $15,000 a year stipend. It barely covered rent and food. If you told that naive 20-something that by her early 30s she’d have over 13x that amount spread across a semi-diversified mix of asset classes, she wouldn’t have believed you. And that’s not just because she’d be confused by what precisely you were talking about by using phrase like “diversified mix of asset classes.”