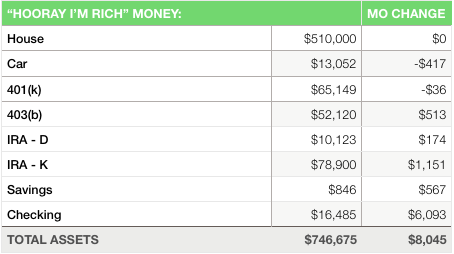 Apparently, I compiled my net worth update for March 2019 and then never posted it. I saw that I hadn’t updated online since November and realized I needed to call out that I received a small stock windfall before I posted numbers showing a wild swing in fortunes.

And so, best intentions became regretted delays. Sorry about that.

Here’s a test of your mettle: can you tell by this string of numbers alone which credit card has a 0% interest offer expiring soon?

It’s card #10! Did you guess the one that’s been relatively stable month over month and we now paid down $1500 towards? If you thought it was #6, I could totally see that honest mistake. Card #6 isn’t interest free, that’s why we make big regular lumpy payments there. I don’t like to pay for credit cards, I prefer they pay me in credit card reward points!

$120,612 isn’t too shabby. It’s wild to think how far I’ve come since my first post where I shared that we were negative net worth and our two year old was richer than we were. Also, we’ve apparently nearly doubled our net worth since I last shared an update in November. Six months translated into an almost sixty thousand dollar increase! Maybe I should post less often…